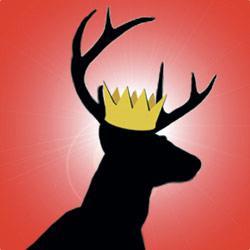 Based on Il Re Cervo by Carlo Gozzi

At his christening, an infant king is presented with two enchanted gifts. The first will lead him to true love. The second could destroy him. Granted the power to transform himself into any creature, the king is tricked and betrayed by his devious prime minister.

To win back his crown and the woman he loves he must learn the true value of everything he has until then taken too lightly. Timothy Knapman’s dark, delicious adaptation of Carlo Gozzi’s fairytale conjures a winter wonderland bursting with playboy kings, lie-detecting statues, feisty maidens, second-rate sorcerers and bloodthirsty politicians.

“Enchanting… I left the venue with a beaming smile and an infectious good mood which lasted all afternoon. ‘The Stag King’ is everything a Fringe children’s show should be: hilarity and happiness with pure, pure magic.” Three Weeks Edinburgh

“Darkly magical… and imaginative show, which both challenges and enchants.” The Stage