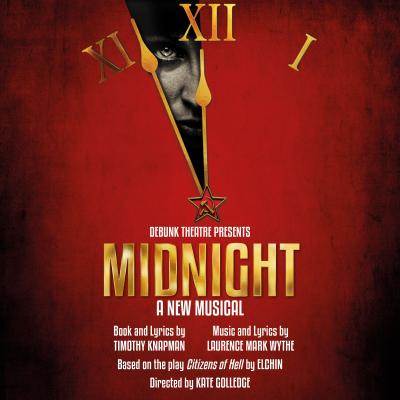 Book and Lyrics by Timothy Knapman

Based on the play “Citizens of Hell” by Elchin

As the clock ticks towards midnight on New Year’s Eve, a husband and wife talk nervously about what the future holds for them and their fellow citizens.

Welcome to Azerbaijan, part of the police state of the Soviet Union in the dying minutes of 1937. The past year has been the worst of the Great Terror, in which the paranoid dictator Joseph Stalin unleashed wave upon wave of arrests. Millions have been tortured and executed. Informants and spies are everywhere. No one knows who to trust.

And then comes the dreaded knock on the door. Is it the NKVD, the state’s ruthless secret police? Or a far more mysterious – and terrifying – visitor? Dark secrets emerge, time is suspended and the husband and wife are tested to breaking point – and beyond…First performance:

“devilishly good fun” There Ought To Be Clowns

“✭✭✭✭ “exceptional… this is an exciting and edgy musical” Musical Theatre Review

“Midnight is an enthralling and entertaining piece of musical theatre, exciting too as it
swerves its way to its haunting climax.” Ought To Be Clowns

★★★★★ “a highly impactful, beautifully-crafted musical” The Spy in the Stalls

★★★★ “an impressive score, clever staging and bags full of emotion throughout” Musical Manda