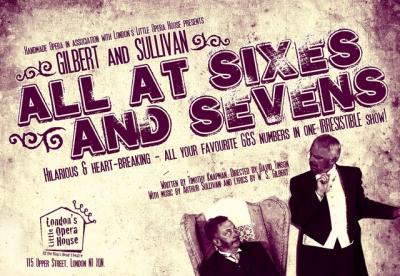 With music by Arthur Sullivan and Lyrics by WS Gilbert

Gilbert and Sullivan are giants in the history of musical theatre. World famous in their lifetimes, they are, if anything, even more popular now. Their comic operas are timeless masterpieces of ‘topsy-turvy’: each a little world of enchanted nonsense, brimming with hilarity, satire and immortal songs.

But their collaboration was, famously, a stormy one. This witty and elegant play explores what made them such a combustible mixture. As Sullivan calls upon Gilbert one last time, the two men recall their careers together, performing favourite numbers from a host of their works.

An affectionate tribute and a heartfelt celebration of a very particular kind of English genius.
Featuring songs from Iolanthe, HMS Pinafore, The Gondoliers, The Yeomen of the Guard, The Mikado, Princess Ida, Patience, Utopia Unlimited, Ruddigore and The Grand Duke.